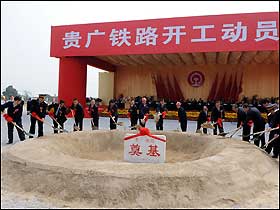 China on Monday began construction on a major regional railway to connect the less-developed southwest China's Guizhou Province with the south China's Guangdong Province, one of the country's economic powerhouses.

The new line is designed to be a double-track electrified railway and will allow trains to travel at 200km an hour. With an estimated cost of 85.8 billion yuan (US$12.6 billion), the Guiyang-Guangzhou line is scheduled to be complete and operational in six years.

The line is expected to have a daily capacity of 100 passenger trains and an annual capacity for goods transportation of 35 million tons.

Vice Premier Zhang Dejiang who attended the ground-breaking ceremony, said the new line, upon completion, would provide a fast rail route with large transport capacity from Guiyang to Guangzhou. It would improve the rail networks in southwest and south China by cutting the journey time between the southwest and the Pearl River Delta region.

This railway was also expected to help people living along the line shake off poverty and achieve sound and fast economic development, he said.

Zhang demanded workers and engineers protect the environment and respect local customs during construction since the line runs through areas that are home to many people of ethnic minorities and famous for beautiful landscape.

The two lines under construction will connect with the existing Guiyang-Chongqing line, making it to be the most convenient way for people travel from the western inland to south China's port cities.

The Lanzhou-Chongqing railway will stretch 820 km, be double-tracked and electrified. Its investment is estimated to be 77.4 billion yuan. It will cut the distance on the route from 1,466km to 820km and the travel time from 22 hours to 6.5 hours.

Liu Yuankun, head of the Guizhou Development and Reform Commission, said a new high speed railway linking the Guiyang-Guangzhou line and the Lanzhou-Chongqing line was being considered.