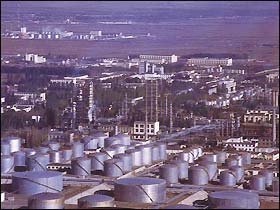 China National Petroleum Corporation (CNPC), the country's top oil and gas producer, plans to invest 12 billion yuan (US$1.707 million) this year in its Dushanzi refinery in Xinjiang, the largest petrochemical project in the western region.

The company "has invested 18.6 billion yuan (US$2.64 million) in the Dushanzi refinery and petrochemicals complex, and will accelerate construction of the project this year", CNPC said on its website yesterday.

CNPC expects to complete the refinery project in the third quarter this year and the ethylene project next year, a company source told China Daily.

The project is expected to generate revenue of 50 billion yuan (US$7.12 billion), he said.

Analysts said the Dushanzi project will boost the local economy in the Xinjiang Uygur Autonomous Region and will help to ease domestic pressure for oil.

Apart from the Dushanzi project, the CNPC has also constructed big projects in the northeast, northwest and southern regions to increase its refining capacity. Its first large refining project in Guangxi in the south is 90 percent complete.

CNPC expects to raise its crude production by 1 million tons and natural gas output by 11.5 billion cubic meters in 2008.

The company plans to build a 10-million-ton refinery in Liaoning province's Huludao. It has approved the plant's feasibility study, a CNPC source said

But it still needs government approval, said the source, who did not wish to be named.

CNPC last year signed cooperation deals with several provinces including Shandong, Yunnan, Henan and Gansu. Sources with the company said it plans to build two refineries in Shandong and Yunnan. The Shandong project is located in the coastal city of Weihai, while the Yunnan refinery will be built in provincial capital Kunming.

China refined 326.79 million tons of crude oil in 2007, an increase of 6.4 percent, the China Petroleum and Chemical Industry Association said.