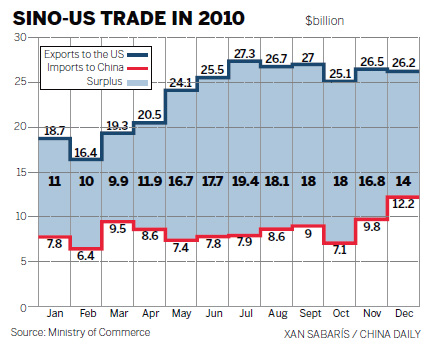 Trade frictions cannot smear economic and trade relations between China and the United States, and bilateral ties have been "fairly good" and "mutually beneficial", a senior official with China's Ministry of Commerce has said.

He Ning, director-general of the ministry's department of American and Oceanian affairs, also emphasized in an exclusive interview with China Daily on Monday that "stable and healthy economic relations could translate into huge benefits for both", and the Chinese government is willing to take steps to make that happen.

The US has over the past year continued blaming China for its massive trade deficit with the country. It has threatened to levy high duties on Chinese imports, and many US congress members said China's allegedly undervalued currency has put the US at a disadvantage.

Some experts have worried conflicting interests will cause bilateral economic relations to deteriorate. But He said ties remain "sound".

"It's natural for trade frictions to emerge between the US and China when the trade volume grows large enough," he said. "This is a normal development in bilateral relations, and we need not read too much into it and jump to conclusions."

China and the US are each other's second largest trading partners, and bilateral trade has continued rapidly expanding over the past decade.

China's robust economic growth has assisted the US' economic recovery and created many jobs for Americans, He said.

China has become the US' third largest export market, with US exports to the country increasing by 31.7 percent year-on-year in 2010 to US$102 billion. US investment in China grew by 17.9 percent year-on-year to US$2.64 billion from January to November 2010. Many economists have said US companies operating in China are a major source of China's trade surplus with the country.

"China would like to work with the US to maintain bilateral economic relations' stability," He said. "Stability is good for both countries. It reduces unemployment and creates prosperity."

The US has been aggressive in demanding China allow its currency to rise. But, He said: "Currency isn't the primary source of China's trade surplus with the US. The Obama administration shouldn't project its domestic problems on China and make China a scapegoat for political reasons."

China's trade surplus with the US grew by 26.5 percent year-on-year in 2010 to US$181.27 billion. The country's total trade surplus dropped 6.4 percent to US$183.1 billion during the same period, China customs figures showed.

US pressure on the currency revaluation will continue for a period, as US unemployment rates remain high, experts have said.

"China has no intention of maintaining a big trade surplus with the US. It plans to encourage imports from the US and more Chinese investment there to narrow the surplus," He said. But the US needs to "loosen its restrictions on high-tech exports and reduce barriers to Chinese investment".