But he also stressed the need to develop mechanisms for counter-cyclical control of credit to avoid systematic risks.

In order to steer credit growth back to normal, the central bank has adopted a range of policy tools including open market operations and increases in the reserve requirement ratio and interests rates, Du said at a forum in Shanghai. "These measures have shown initial good effects," he said, without elaborating. 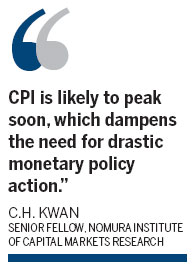 The central bank in October raised interest rates by 25 basis points, the first time since 2007, and announced on Nov 19 an increase in commercial bank's required reserves by 50 basis points effective from Nov 29, the second such hike in the month and the fifth increase in 2010.

There is growing market concern that China will further tighten monetary policy if the adopted measures are not effective enough to cool down inflation, which led the nation's benchmark Shanghai Composite Index to fall 5.33 percent in November.

The central bank should have a "prudent" monetary policy and increase yuan exchange rate flexibility to rein in inflation, Sheng Songcheng, head of the central bank' statistics and analysis department, wrote in a commentary published in Financial News on Tuesday.

Increases in food prices have become the major concern in China's economy, Sheng said, predicting that this year's CPI will no doubt surpass 3 percent, the official target set early this year.

"The government is talking about specific food price caps or regulatory measures, but this is business as usual in years when food supply conditions are tight," said UBS Chief Asia Economist Jonathan Anderson.

China's inflation is not spiraling out of control, as its headline CPI inflation is below the emerging market average, he said. "Core inflation (excluding volatile food and energy prices) is low and flattish."

The authorities are hesitant to hike interest rates significantly, given their experience that interest rate hikes have not been very effective in containing inflation within a short period of time, according to Wang Qian, JPMorgan chief China economist.

"Instead, they will likely adopt fiscal subsidies for lower-income urban households and release some government reserve stocks of food to help limit price increases for basic consumer goods," Wang said.

This year's Central Economic Work Conference, which generally convenes in early December and will gather the country's highest-level policymakers, is widely expected to set the tone for next year's monetary policy.