On the coast of China's Jiangsu Province, one of the most prosperous regions in the country, there is a cluster of nuclear power plants and wind farms either in operation or soon to come online. Using technology both developed domestically and overseas, they are changing the energy landscape of the area.

As one of the country's industrial hubs, Jiangsu currently needs to import 80 percent of the energy it consumes from other regions. But with the rapid development of new energy industries, the province is expected to be another energy production base in China, said Mao Weiming, director of Jiangsu Development and Reform Commission, the economic planning body of the province. 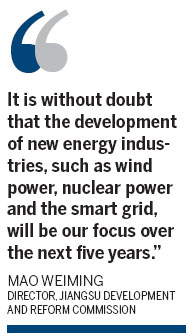 The province has set up a development target for its energy industry in the 12th Five-Year Plan (2011-2015), said Mao. "It is without doubt that the development of new energy industries, such as wind power, nuclear power and the smart grid, will be our focus over the next five years."

Jiangsu is one of seven planned wind power bases in the country, each with a minimum potential of 10 gigawatts (gW). So far, power capacity of 1.2 gW generated by wind farms has been connected to the power grid, and 800 megawatts (mW) of wind power plants are under construction, said Mao.

"It has been shown there is 21 gW of wind energy resource in Jiangu, which is equivalent to the output of another Three Gorges project," he said.

Other clean energy generating sectors such as nuclear and biomass power have also seen a boost in Jiangsu. "At present non-coal power generation accounts for around 15 percent of the total power capacity in our province. We plan to increase the figure by one percentage point a year between 2011 and 2015," said Mao.

Other provinces in China have drawn up ambitious plans to develop new energy in their 12th Five-Year Plans. "New energy has become the most dynamic sector in the country," said Li Junfeng, deputy director-general of the Energy Research Institute (ERI), part of the National Development and Reform Commission (NDRC).

The development of new energy industries will also be highlighted in China's national 12th Five-Year Plan for the energy industry, said Li. "In terms of scale they will be developed in this sequence: nuclear, hydro, wind and solar energy," he said.

The four sectors are also the most developed new energy resources in the country at present.

It is essential for China to develop new energy industries if the country is to achieve its targets in emissions control and environmental protection, said analysts.

China has already set up two major targets for energy and the environment. They are to increase the use of non-fossil energy to 15 percent of primary energy consumption in 2020, and to reduce carbon intensity by 40 to 45 percent in 2020 from the 2005 levels. Development of new energies is a must to achieve these two targets, said Wang Zhongying, a researcher with ERI.

With such targets in mind, China should take steps to increase the use of non-fossil energies to around 13 percent by the end of 2015, said ERI's Li.

In line with the rapid growth in new energy industries, China has already adjusted the targets for some sectors. For instance, the country made a plan in 2005 to increase its nuclear power capacity to 40 gW in 2020, when it would account for 4 percent of the country's total power capacity.

But with the quick growth of the industry, the target has been raised to between 70 and 80 gW, according to officials with the National Energy Administration (NEA).

China now has 11 nuclear power reactors in operation. These reactors have a total capacity of 9.1 gW and account for around 1 percent of the nation's total power capacity.

There are three nuclear power bases in the country - at Qinshan in Zhejiang Province, Daya Bay in Guangdong Province, and Tianwan in Jiangsu Province. All nuclear power reactors under construction now are in China's coastal area. In addition to that, many inland provinces have also embarked on plans to develop nuclear projects.

According to a recent report by the World Bank, China needs an additional investment of US$64 billion annually over the next two decades to implement an energy-smart growth strategy.

Such investment should be aimed at making the power and transport sectors more efficient and developing renewable energy, according to the bank. The new energy business has become another growth industry for many companies in China. An increasing number have made plans to enter the lucrative nuclear power market.

The company will further increase capacity to 6 million tons of oil equivalent in 2015, according to Zhou Mingchun, chief financial officer of PetroChina Co, the listed arm of CNPC. China Petrochemical Corp (Sinopec), the country's second largest oil company, has also said the company would speed up development of new energies including coalbed methane and geothermal energy. Sinopec has set plans to develop coalbed methane in northern China and shale gas in southern parts of the country, the company said in its 2009 corporate social responsibility report.

However, some analysts are worried that too much involvement of large State-owned companies in new energy industries may create a monopoly situation.