BYD was also making efforts to fulfill its dream of overtaking Toyota as the world's No 1 carmaker, through annual sales of over 10 million cars by 2025, via a series of "prudent" moves it made recently, said Wang Jianjun, deputy general manager of BYD Auto Sales Co Ltd. 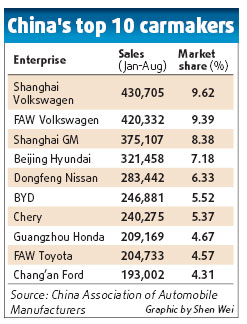 "As we planned, we will first make every existing BYD model top its respective segment, and then develop new products," said Wang.

F3, the most popular BYD model, was crowned China's best selling car thrice - in January, July and August - this year. The company is planning to sell 180,000 F3 cars this year.

Shares of BYD Co dropped slightly, by 0.9 percent to HK$66 on the Hong Kong bourse yesterday.

However, its stock, 10 percent owned by US billionaire Warren Buffet, has surprisingly surged 648 percent during the past year. The company's chairman Wang Chuanfu said earlier this month that Buffet intended to raise his stake in BYD, as the legendary investor believed BYD had good prospects in the development of new energy vehicles.

Last week, the Hong Kong-listed company said that it had received the necessary shareholder approval for a public float on the Shenzhen Stock Exchange within one year, with a 100-million-share issue to raise funds for its new energy vehicle projects.

At the end of July, BYD said it planned to expand its existing production facility in Xi'an by setting up a new plant with an annual output of 400,000 units to produce its F3 cars, other new models and auto parts.

"These prudent moves promise healthy development for BYD in the next few years," said Wang.