The Poor Stuck at Bottom

Members of China's lower class are facing more limited opportunities to move up the socio-economic ladder as resources become concentrated in the hands of a small number of wealthy people, greatly hindering the country's efforts to build a fair social class structure, experts have warned.

"The flow of different classes in China is somewhat blocked," said Ge Daoshun, a social policy expert at the Chinese Academy of Social Sciences (CASS).

Family background has become an "invisible barrier" for many people who want a good job, Ge said.

The chance of an official's child being employed by government is more than twice that of a child of a common citizen, assuming that their fathers have the same educational background, the CASS research found. 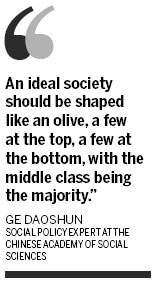 According to Ge, children from wealthy and well-connected families can easily acquire decent jobs, handsome incomes and good opportunities to develop. However, those whose parents have no money and no power may find it difficult to improve their position in society.

Some 35 percent of college graduates with a rural family background were unemployed in 2009, while the proportion was 15 percent for graduates whose parents are doing management work, according to a survey by MyCOS, a Beijing-based consultancy.

The survey also found that children from rural families earned the lowest income among all graduates six months after graduation.

At the same time, universities have seen fewer enrollments from rural areas. In 2009, some 840,000 students did not sit for the national college entrance exam. Most of them were from rural families who cannot afford tuition fees and were pessimistic about the employment situation for college graduates. Instead, the students chose to be migrant workers.

Gu Jun, a sociologist at Shanghai University, told China Daily: "An adequate flow of people into different classes is a must as society develops.

"China's new social class structure has not yet formed, and once barriers are set, the lower class will find it hard to rise," he said.

An ideal society should be shaped like an olive, a few at the top, a few at the bottom, with the middle class being the majority, Ge Daoshun, the CASS expert, said.

When a society's middle class reaches about 60 percent, the society will enjoy relatively stable political and economic conditions and a good social order, he said.

According to a standard set by the CASS in 2006, a Chinese with a yearly income of US$11,800 to US$17,700 can be called middle class. But currently the middle class accounts for only 23 percent of the population.

People who enjoy rich social and financial resources will pass on these benefits to the next generation and even the generation after that. Social resources include economic, organizational and cultural resources. These resources are now almost centralized in the hands of a small number of people, he said.

"It could be a danger for China's social stability, if the wealth gap continues to increase," he said.

Ge Daoshun said that some systemic obstacles, such as hukou (permanent residency), employment and social security systems, left over from China's planned economy era before 1978, have also hindered the social movement of people from all classes.

He suggested that China should deepen reform and improve policy innovation in sectors such as income distribution, education, hukou and social security to gradually make the class structure adapt to the new economic structure.